Joseph Vincent "Joe" Flacco is an American football quarterback for the Baltimore Ravens of the National Football League.

He grew up in Audubon, New Jersey, a small suburban town. He always enjoyed playing sports, and could often be found at nearby athletic fields with his family practicing football and baseball. In high school, Flacco earned varsity letters in three sports – winning the most acclaim on the gridiron.

In his rookie year, Flacco started every game and led the Ravens to two road wins in the 2008–09 NFL Playoffs, becoming the first rookie quarterback in league history to win two road playoff games. As a rookie starting quarterback he won 14 games, 11 during regular season. In his second season, he improved his numbers, setting single season franchise records for completion percentage (63.1) and quarterback rating (88.9), and in his third season he became first all-time in Ravens history for passing yards and passing touchdowns. He is the only quarterback in NFL history to win a playoff game in each of his first five seasons.

With Flacco as Baltimore's starting quarterback, the Ravens have won the AFC Northtwice, appeared in three AFC Championship Games, and defeated the San Francisco 49ers in Super Bowl XLVII. Flacco was named Super Bowl XLVII's MVP, concluding a postseason run in which he tied Joe Montana's single postseason record for touchdown passes (11) without an interception.

Flacco has become known for his outstanding performance in the postseason, having established a career playoff record of 10-5 and holding the record for most postseason road victories by a quarterback with 7.

Flacco is known for his low-key demeanor and calm during games, giving him the nickname "Joe Cool", and for having one of the strongest arms in the NFL, which allows him to use an "aggressive, high-risk deep downfield passing game." 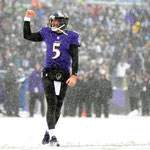